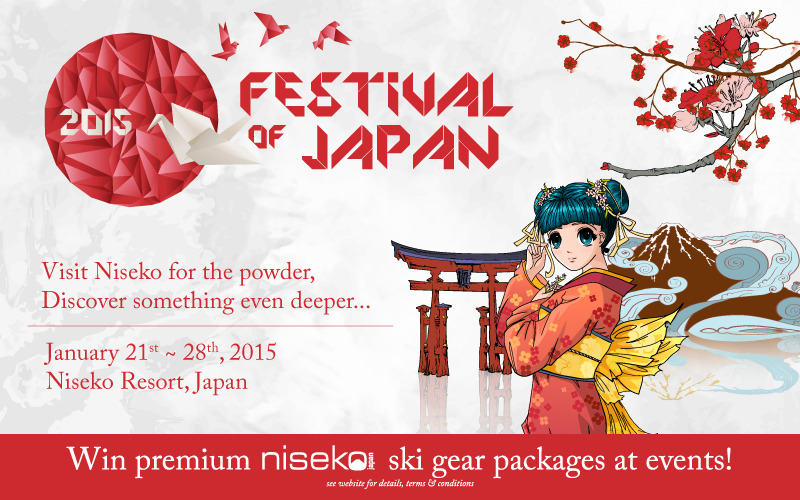 So you and your family have made the trip to Japan to experience some of the world’s finest powder snow … The skiing is amazing, of course! The food is unbelievable! The people and service are incomparable! But what about discovering the very soul of Japan?

Last year, the inaugural ‘Festival of Japan’ was brought together for visitors to Niseko to experience first-hand the rich and varied culture of Japan as practiced and performed by some of the very best in their fields. Combined with the critical support of local councils and all four of the Niseko ski fields, this festival is a collaboration between local Japanese, long-term foreign residents and some of Niseko’s most established and widely regarded companies. The Festival of Japan allows visitors to discover a wide spectrum of Japanese and Ainu arts and crafts in an accessible, interactive selection of events catering for all ages and interests.

The festival will be running again this season from January 21st – 28th 2015, and will feature both some of the most popular events from last year as well as a range of new events. All events will be held in central Hirafu, with most being held on the top floor in the brand new Hirafu 188 building’s beautiful conference center (the view of Mt. Yotei is worth the visit alone!).

The principal ambition of the festival is to ensure as many people as possible get the opportunity to discover the depth of the arts in Japan during their time here. Thanks to the wonderful support of Niseko businesses and the kind donations from attendees at events last year, the festival this year is fortunate enough to be able to offer events free of charge*! Furthermore, attendees to events this year will have the chance to win a range of premium ski gear packages at each event thanks to the very kind support of one of the festivals sponsors, ‘Niseko’ brand ski wear! You can learn more about the prizes and how you can enter here.

While we think all events are must-visits, among those not to be missed are the Opening Ceremony on the 21st, featuring a Shinto blessing ritual and a performance by Soubugen, a traditional instrumental, vocal and dance project. Returning for their second year and a performance book-ended by two world tours, Soubugen will be accompanied by classically trained dancers, and again promise a spectacle Shamisen performance that last year had the audience picking their respective jaws’ up off the floor.

Hokkaido’s indigenous Ainu culture has seen a revitalization in recent years, and the Discover the Ainu event offers an exciting opportunity for both Japanese and non-Japanese attendees to discover an entirely unique piece of the archipelago’s cultural legacy. As well as an evening event, including a story-telling and musical performance including an Ainu cultural ambassador who has been featured in The New York Times, there will be a class held on the same day for kids to make both a traditional Ainu instrument and embroidery under the guidance of Ainu teachers.2

It goes without saying that the Martial Arts of Japan event was another crowd pleaser and there will be a follow-up performance this year. A demonstration and discussion of Japan’s most famed martial arts by life long students and teachers, including the elegance and explosive power of Kendo, the way of the sword; one of the most mentally and physically challenging of all the martial arts. Last year was a real treat with audience members offered the chance to (safely!) experience both wearing the armour (bogu) and wielding the bamboo sword (shinai).

Hidemaro Kunisawa, a masterfully talented artisan of traditional Japanese instrumental performance, celebrated domestically in recordings and cultural awards, will perform a range of classical compositions from as early as the Edo Period. The haunting, rich sound of both the Koto and Shamisen should be of particular brilliance in the Hirafu 188 space, so get in early for front row seats!

Held in everyone’s favorite haunt of Niseko’s best live music, Half Note, the Discover Sake evening will introduce attendees to both the distilling, variety and (of course) consumption of Sake, Japan’s signature drink, against the backdrop of some seriously cool live jazz by The Niseko Jazz Trio. Seats are of course limited for this, so this is one to register early for through the festival website.

Other new events this year include a Rakugo performance; the art of comic story-telling, one for all ages, is something that even many Japanese don’t have the opportunity to see. This is Japan’s traditional version of stand up comedy, though as the comic is seated on a cushion it is sometimes called “sit-down comedy”, and the tradition stretches back into the 1700’s.

The religious world of the Japanese is a complicated web of two world-views that provide explanation for distinct aspects of life in Japan; Shintoism and Buddhism. The Religion in Japan event will introduce attendees to the harmony of these two ideas, as well as their function in the Japanese identity, offering a deep and vital insight into how Japanese society is what it is today and include a taste of some traditional cuisine.

You can view the schedule on the website and join the Facebook page for a list of full events and in case of any changes to schedule or location.