Picking what the season is going to be like is a dark art.

It’s that time of year when everyone who has spent more than 10 minutes in Niseko or visited once in 96 has a weather theory and the ability to see into the future. You could even say weather forecasting is an unofficial winter sport here.

Some folks go with the 100% organic/spiritual “I have a connection to the mountain” system and base their theory on what the weather will do on things like insects and animals “Yeah I saw the Yuki-mushi today we’ll have snow in 10 days and it will come with a north wind”.

Others go with the old historical chestnut “MMM it’s been an early start just like 62 and if you look at the recorded depths on average each year since 62 when we have this much snow in November it goes on to become a 15m plus year, buy a bigger snow blower”.

Then you have the scientific crowd who can tell you the temperature at the Ross Ice Shelf research station, Japan sea, Pacific Ocean, Upper Station, Lower station Middle station. They can tell you what the upper atmosphere is doing, how fast the jet-stream is moving and exactly when the cool air mass over Siberia will be forced to push down to Japan. 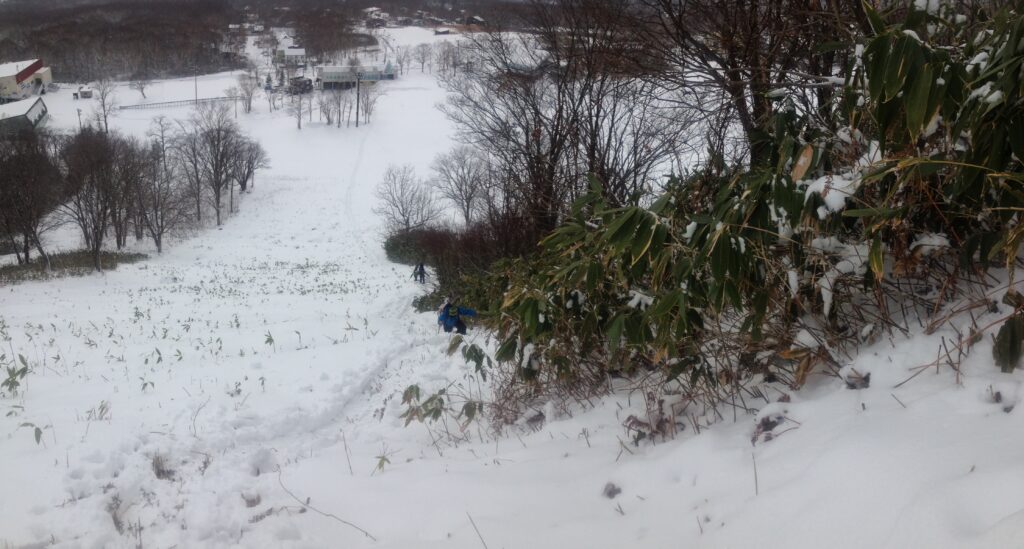 Looking down the main run at Annupuri on this day in 2014.

No method is fool-proof and no method is 100% accurate but all have great elements to them. At 360 we like to hedge our bets and kind of triangulate across all the above methods and then apply the most accurate method know to man … we simply open our door and look  then along with our followers each year we keep an eye on the 360niseko snow stations.

In the seminal Niseko snow film “Signatures” there is a particularly fitting bit of audio where Niseko snowboard pioneer Taro Tami explains that your knowledge of the snow begins at your door as you shovel it clear. As per normal Taro is spot on and there is no better way to understand the snowpack and the changes in it than clearing it each day. That same relationship with the daily snow and the unique Hokkaido weather are also the main narative of the film “Snowsurf” which again features Mr Tamai and his followers as the central characters.

Snow depths directly in front of the Powder Company HQ in 2014. The spot where the closest person is is about under the new beginners lift.

We though it would be great to shed a little light on a few things well worth noting about Niseko weather and snowfall and also explain a little bit about why the winters here function the way they do and more specifically the forecast for the next 3 days. So …

This weather system is the engine room of our snowfall and runs along these lines. Low pressure storms that form off the southern end of Japan and sometimes almost as far down as the Philippines spin in an anti-clockwise direction and move from South to North. They generally track along the side of Japan either over the Japan Sea or the Pacific Ocean and then as they finally make land fall over Japan they peter out. In Autumn they are pretty destructive due to the extra strength of the storms via warm ocean water but in winter not so much.

The forecast is showing a classic one of those this week end. The South-to-North low has one VERY defining characteristic… a temperature spike. While the low is in the south of Japan it drives wind into the southerly quarter and this pushes warm air from southern latitudes into Hokkaido.

These lows move pretty fast and can sometimes traverse the entire length of the country in a matter of a day. Once the storms get further north they do the opposite thing with the wind direction and start pulling the cold air from the north and west (Northern China, Mongolia, Russia) across the sea of Japan where it sucks up moisture that then becomes the snow that fills our resorts.

Boom Saturday it’s all hands on deck in the Sea of Japan.

So to summarise while the low is in the south it drives our temps upward via southerly winds and then as it moves north it drives our temps down with northerly winds and the fast moving nature of the low and the switching of the wind direction from south to north causes a temperature spike. Have a look at the temp forecast for Fri-Sat-Sun and then look at the snowfall forecast, warms up starts snowing and then the temp drops like a stone.

By Sunday the Low is north of us and pulling the cold air from Russia down at full pace.

In the early season this means the precipitation often starts as rain that then turns to snow but in the banger years the temps are cold enough that it’s only ever snow and the difference is heavy or light snow and rain events are rare from November onward. There is only a degree or two in it so you don’t need to be a rocket scientist to see the impact climate change can have on our snowfall and more importantly the quality of our snow.

By Monday things have started to become mellow and mild again.

We are not going to make a call on what sort of year it’s going to be other than the fact that the forecast looks great for the next week and as long as temps stay low post this weekend opening day is looking good!

… stay tuned for a bit of a rundown on the black belt weather stuff later this month when we try and figure out the micro-climates here in Niseko and explain them. We grabbed the screenshots of the forecast from the AWESOME wind site Windy.ty check it out here and book mark it for the first part of our forecast triangle of knoweledge.